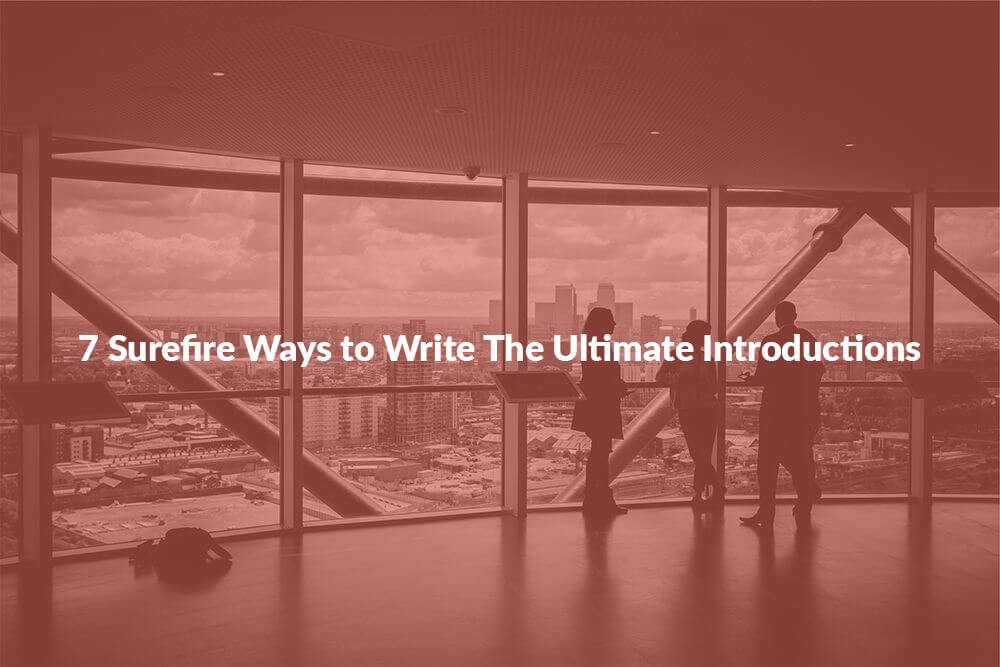 Contactually is the second startup, not counting my internships, that I have the pleasure of gaining invaluable experience from. And one of the most frequent questions I get asked is how I came to find the startups that I'm currently working for and have worked for.

It was a mixture of chance, networking, and good introductions. In fact, I probably wouldn't have had a relationship with anyone at Contactually without an introduction.

Introductions are all-around tough. They are hard to ask for, and probably just as hard to give. Are you telling each person they need for a good starting point? Are you introducing the right people to each other? What do you need to say exactly?

It's simple to say "Hi so and so, meet so and so" and then assume that one will take the lead, but you know what assuming does...It tells each party nothing. It's ineffective and the value of that introduction is now diminished.

So how do you write the ultimate introduction that hits on all of the right points? Based on our own experience in writing and receiving introductions, we've identified 6 elements that great introductions have. With these 6 elements, or a combination of a few, you can can write introductions that actually work.

Here are 6 Surefire Ways to Write the Ultimate Introductions

More than likely, you've received an introduction through email or a simple in person intro greeting. But, those aren't necessarily the right or most effective channel. Some people operate better on LinkedIn, Twitter, Facebook, or maybe even the phone. You can easily see what channel both parties are more engaged on and then determine the best channel to make the introduction on.

Just because you are use to making introductions via, email doesn't mean you are locked down to email to make all of your introductions. Try sending a message through LinkedIn or a direct message in Twitter, both are probably more unexpected; however, they may increase the effectiveness of the introduction because of the unusualness in the first place. As mentioned before, if this is where they normally operate, then it will be more likely that they will respond to the introduction.

Stories have a huge persuasive power over people. They conjure up empathy, focus, and activate the mind. In the image above, the brain treats storytelling in a few different ways allowing for success of the storyteller if they story is told well.

"Why am I introducing these two people?"

You probably should have answered that question before you even began attempting the introduction. People are now busier than ever and if it's a random introduction one of the parties will definitely notice.

Recalling the similarities between the two people and why they would benefit from knowing each other is one of the first things you should establish. It will make the overall introduction easier to form and send in the beginning.

I've read different studies, advice and experiences on the lengths email should be according to effectiveness and productivity. However, if I look at a cumulative view and analyze my own habits, I frequently read and respond to shorter emails much faster than ones that are several paragraphs long. It's not that I value a shorter length over a longer one, but I can process the information much faster if the email is shorter.

Introductions shouldn't be paragraphs long. And maybe you're torn with my previous point about telling a story, but it all can be done in four sentences. 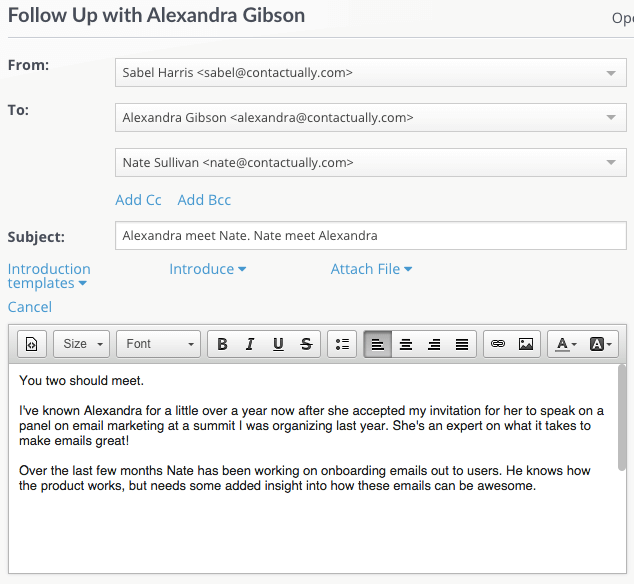 Four quick sentences, both sets recalling important things and short stories that would make an introduction between the two short, simple, and effective. It can be hard to tell a story in such a quick introduction way, but if you can keep the sentences down and stick to some points on how you met, why it would be great if the two parties met, then you can put together something with both elements that will make your introductions successful

How will these two individuals know how to get in touch with each other after the introduction? Make sure to include relevant contact information for each party to follow up with each other.

Email and phone number are basic necessities, but knowing which channel each person operates in is important to know too. So, you can also include a Twitter handle, LinkedIn profile, etc. as well.

And you don't want that to happen.

After you've made the introduction and you haven't heard from either party since, don't be afraid to follow up. Maybe email each of the parties separately to see how the introduction has progressed? Or reply to that introduction asking if they have had a chance to connect.

It goes without saying, don't be annoying; yet, you don't want your introduction to go into oblivion. If you've added and followed the other elements, a follow-up should come easily and less invasive. Did you know that most sales people give up after one follow up? Don't be that person.

An effective introduction can go a long way. Not just with the two parties involved, but for you for making the introduction. It expands your network and cultivates your relationships even more. You know we're all about the relationship ROI here at Contactually.

Need to take some more steps before you make those introductions? Download our cheat sheet on getting to know your prospects...

Next Post
Building Relationships in Your Network: How a $20 Gift Can Have a Huge Impact