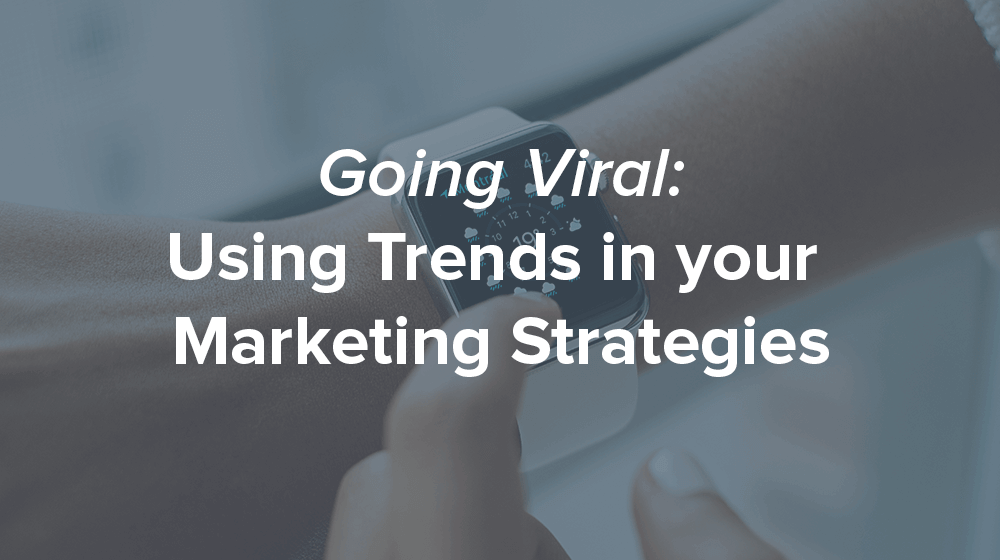 Marketing is a game of making a connection, and the stronger the connection, the more likely the customer will buy the product marketed. Marketing varies on the target audience, categorized by age, location, and even consumer preferences. In today's modern age, marketing campaigns do not last longer than a couple of months, if distributed effectively enough to reach its highest potential reach. The average length falls between 3-9 months.

With such a small period of time, marketing relies heavily on popular culture and its trends. A cultural trend is any type of activity that is participated in by society as a whole, and big trends recently have been: the Ice Bucket Challenge, the Mannequin Challenge, Pokemon GO, and spontaneous Flash Dances. There are many more, but all of them present businesses with a unique opportunity to capitalize on new revenue.

Especially when it comes to social media, where the demographic is mostly younger people, marketing campaigns must have relevance to current events and trends. The best marketing teams are opportunistic in regards to world events and social trends to optimize their product reach and sales potential. Of course marketing on every single trend alone will not earn customers, but rather drawing the connection between trends to your own product will.

We have made a list of possible ways for real estate agents, small businesses, and others can capitalize on social trends. Here are some recent trends and how a marketing team would have approached it to fit their business.

4 Marketing trends to try out:

The Ice Bucket Challenge went viral in the summer of 2014 and originated to promote awareness for Lou Gehrig's disease, known scientifically as ALS (Amyotrophic lateral sclerosis). The challenge, started by Pro golfer Chris Kennedy, involved posting a video of dumping a bucket of ice cold water upon yourself and challenging someone else to do the same and donate money to the ALS Association in order to find a cure to this debilitating disease.

Within the first month more than $50,000 was donated, and at this point the ALS Association reports that $115 million were raised in that 8-week period of 2014. Less than two years later, thanks to the influx in funding, an ALS-contributing gene was discovered!

In the case of charitable trends, companies should be involved and willing to support their employees who may want to partake. Goodwill in companies goes a long way; especially in the case for the Ice Bucket Challenge. We at Contactually took the opportunity, as a company and as individuals, to support this great cause.

Started in October of 2016, the Mannequin Challenge is videotaping a group frozen in movement while the frame moves around and Rae Sremmurd's "Black Beatles" plays in the background. The goal of the videos, as the trend grew, was to be frozen in more complex positions, such holding a guy in the air while simultaneously feeding him.

Creativity is key in this trend. Creating your company's own Mannequin video, which features either your company's office space, products, or both, must be involve as many of your employees as possible. This trend is a great way to show off the fun, human side of your company.

Pokemon Go, a smartphone app released this past July in 2016, became an instant and major trend. The app uses location data to direct the user towards scattered Pokemon and enables them to capture. The game became immensely popular, over 500 million downloads worldwide in 2016 alone, and was such an impact that countries passed legislation prohibiting its use in certain areas. The game's nature was new since it has people moving around about to places not frequently visited. The game itself has led to the discovery of numerous corpses.

Pokemon Go has opportunities for businesses as well. Businesses are able to sponsor locations with Pokemon to attract customers. On top of sponsored location, a Pokemon flash sale would convince parents, who came to your location due to their kids love for Pokemon, to buy your products.

Flash mobs are big groups of people out in public, who act as if they don't know each other, and then suddenly act in a certain way, unanimously. Beginning in 2003, the most familiar type of activity flash mobs partake in is coordinated dance, and they usually occur in train stations or in pedestrian ways in bustling cities.

Without spending too much time, a way a business could use this to their advantage is, by orchestrating a flash mob and the use of a drone, construct a gigantic human mob in shape of your business's brand logo.

Marketing on trends is not a shallow way to market to the public, but rather an opportunistic method to stay relevant. In today's world of extreme competition, there always is another alternative firm to provide the same service yours gives, a perfect product and customer service are not a recipe to success. The only way to cash in on your phenomenal business is to market it and market it well.