"Daddy, where does bad data come from?"

I've written before about how much trouble businesses can get in when they use data badly. You know X, you think X means Y, you do Y, and before you know it you're getting phone calls screaming about how you carelessly allowed Z to happen.

This is a problem, but it's not the one most small businesses face. Instead, they're dealing with the two most common data scenarios :

It's hard to say which is worse (they're both bad), but I'm going to go with "bad data" on this one. Why? Well, when you have no data, at least you know what you don't know. When you have bad data, you're not only wrong, but you think you're right -- after all, you have "data" to prove your point! 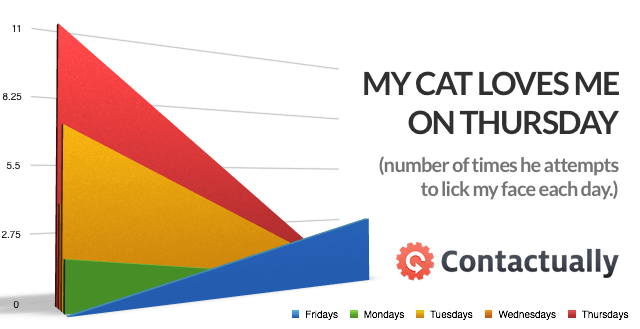 It's gotten really easy to get SOME kind of quantitative feedback from things you do every day, like email, advertise, or post on social media. I got an email from Facebook the other day; something one of the guys in my band posted was "performing 85% better than all other posts on the page!", as Facebook breathlessly told me. Talk about a useless, context-free nugget of nothingness. Good thing I don't have anything more important than my musical career riding on it.

If you want something done right...

Anyways, while Twitter and Facebook will happily report numbers like this, one of the best ways to get less biased information is to set up your own analytics system for things as important as your website. For many people, this system is (and should be) Google Analytics. It's free, incredibly powerful, and pretty easy to get connected to just about any site. For the most part, all of this is great, except that it's a prime candidate to generate the dreaded BAD DATA.

Now, there are a lot of different problems I'm lumping under bad data. Some of them are simple -- Analytics, or whatever system you're using -- may literally be misreporting what's happening on your site, because it's missing visits, double-counting, or whatever. That's usually a setup problem. Other bad data problems are more insidious. The numbers you're gathering may be technically correct, but clearly infer a conclusion that isn't actually true.

How did this affect us?

If you like learning about stuff like Google Analytics, you won't want to miss anything on The Contactually Blog. From email marketing, to media production, copywriting, and relationship building, we cover just about everything you need to grow your business.

Sound interesting? Subscribe to the blog today, and you'll get a short, weekly summary of everything we post delivered right to your inbox. It's easy!

Let me give you an example. When I first started at Contactually, and began looking at the data for Contactually's different sites (our main site, along with our blog, training, and support sites), one of the things I immediately looked at was bounce rate. Simply put, bounce rate is when someone arrives at a site, and then leaves without doing anything or visiting any other pages. In general, it's a decent indicator of whether people are finding what they're looking for. If most people bounce, it usually means something is missing.

So back to us. We had extremely high bounce rates for all of our properties, which was depressing. No matter what we did, the numbers said we just couldn't keep people interested in the Contactually universe for more than a page.

That's what the numbers appeared to say, anyways.

As it turns out, our Analytics account was configured so that when someone went from, say, this blog post, to our main site, or to a video demo on our training site, it was recorded as a bounce, even though that's exactly the kind of behavior we were aiming for. Since we had never configured Analytics to understand the connection between our properties, it just saw them as external sites.

Our data said people were leaving (which was true), but it wasn't calibrated to detect when they were leaving to go exactly where we wanted them to.

I made these mistakes, but you don't have to.

There are a million other examples of things like this, where good data leads to bad conclusions, largely due to the complexity of configuring something like Analytics. Fortunately for you, we've compiled some of our most productive experiences into a short, highly entertaining eBook that we call "The Google Analytics Setup Guide". It's not some giant reference manual -- but it is a list of some of the important steps you need to take if you want to get properly reported, actionable intelligence from the system.

So check it out, do things the right way, and sleep soundly knowing that you're not building your business on numbers that don't mean anything. You can thank us later.

Next Post
What is the point of using Google Analytics?