The typography etiquette of email 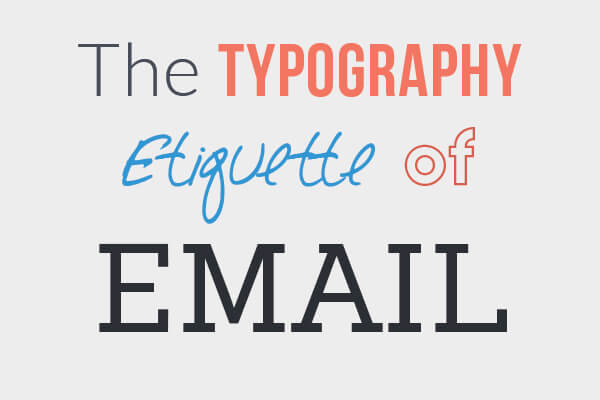 Yes, I just quoted myself. But let's not detract from the fact that there are emails out there that just suck, as I so succinctly put it. The good and frustrating part about it is that it's an easy thing to avoid and an easier thing to fix. As of late, I've seen way too many email etiquette rules being broken, and it's driving me crazy. Just ask my coworkers and my gray hairs.

Regardless of setting, etiquette is still important. Just as there are things you wouldn't do at work or in public, there are things you should -- or should not -- do in an email. I assume you want to come off as someone who is incredibly smart, attentive to detail, and just gets email, right? Of course you do!


My biggest gripe at the moment is with poor choices as far as typography goes in emails. It might be the most overthought and overlooked (at the same time!) component of emails, weirdly enough. Don't overthink it, and don't overlook it.

It's easy to forget that typefaces could be important in the world of email, but there's a reason designers exist. And if you're not a designer, don't sweat it! Picking fonts is easy. What you want to do is pick something that is easy to read and is easy on the eyes. And this is where people begin to overthink.

It's OK to use the default typeface. Heck, you probably shouldn't change it. The default font is generally pretty good, so change at your own risk. Even as we speak, I'm typing this in Gmail, and the default font is a generic sans serif font. It's no frills and very legible -- so why go with anything else? Again, don't overthink it! And, by all means, don't use Comic Sans.

As far as colors go, color should be seldom used. The only time I could ever see it being actually useful in an email is for emphasis. Beyond that, stick to black. Not only is it most readable due to contrast, you will not be seen as the annoying person shooting emails in navy blue text.

Oh, and let's not forget about my dear friend the ALL CAPS. The consensus is that it looks like shouting, and no one likes being yelled at.

Got it? Here's a quick recap of today's lesson: