Why You Won't Sell Anything at SXSW

SXSW Interactive's portion is starting in less than a few days. Last year over 32,798 people attended with over 1,100 sessions, and 2,377 speakers. 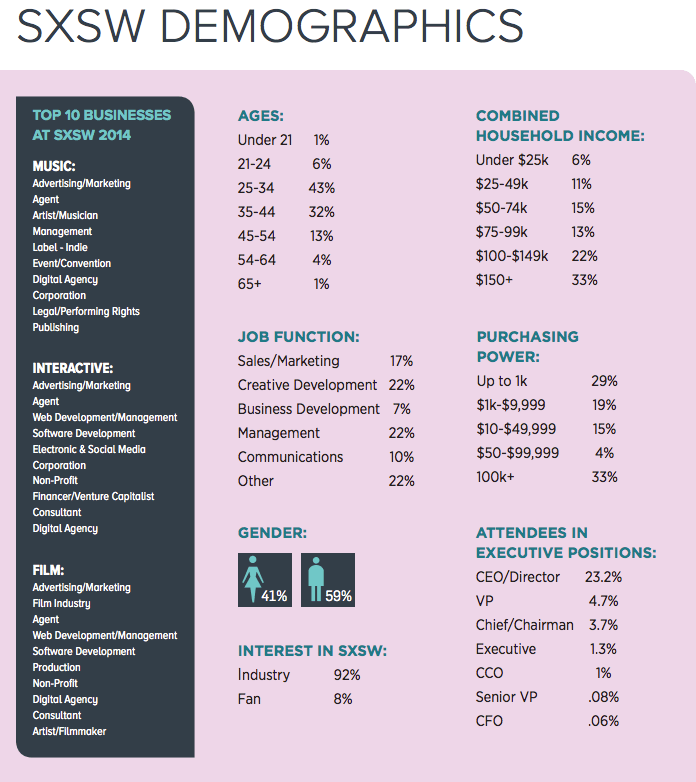 I had the opportunity to attend SXSW last year with the company I was at before Contactually, and boy...it was an experience. I went to a few trade shows previously, but it was no where near a typical trade show. With the amount of people, companies and parties going on in those 4 days, it was a whirlwind. I had set goals with the team previously on how many leads we wanted to bring in and close, along with other marketing benchmark metrics. However, it didn't turn out the way I was thinking it would.

I remember overhearing someone say they kept their calendar fairly open to have serendipitous encounters. At the time I laughed at this statement and thought it was silly. Yet, things have changed especially when I factored in what happened afterwards.

As a marketer, I have to show how a campaign or something we're spending money will prove to have a positive ROI. I have to be proactive and make educated assumptions that a campaign will succeed because marketing is expensive especially events, like SXSW.

However, SXSW will not prove to have a positive ROI until months after and knowing that you won't sell anything upfront is an expectation you must set at the very beginning. You won't be able to set up sales calls, demo your product effectively, or probably get anyone to sign a yearly deal with your service. With that many people, brands, sessions, parties, and influencers all in one place, SXSW is a learning and relationship building opportunity. And even though you won't directly sell anything at SXSW, you need to set things beforehand in order to count the trip as a success.

Instead of selling a SXSW, here are some factors you can do order to make your trip a success:

In the weeks and days leading up to SXSW, try to get in touch with individuals who you would like to meet up with. You'll be surprised as to how many people you know who are going; yet, not everyone is going to SXSW, but they may know of someone in their network to connect you with who you can meet up with.

Setting meetings beforehand will allow you to stay organized and avoid feeling overwhelmed with all of the other activities happening at once. These meetings will also give you the opportunity to provide some structure, goals, and potential to develop better business relationships.

Create a pipeline in Contactually with all of the ideas of potential meetings and then how they progress through the "lifecycle" in actually schedule of the meetings, and ones that happened at SXSW.

Be Open to Networking

Usually when I'm out at a bar with my friends, I typically stick to talking with my friends. I know that sounds almost "cliquey," but that's just what I'm comfortable with. But at SXSW, that is something you can't do. Because their are so many people, so many influencers, and so many parties, all happening at once -- you must branch out and strike up conversations with people you've never met before.

Last year I was able to go to the Tumblr party and although, it was extremely packed I met some really interesting people on just the one floor I was on. But, if I stayed with the group of people I was with I probably wouldn't have met those people.

I would stray away from questions like "Where do you work," "What do you do for a living," and "Where are you from?" to the latter portion of your conversations. But ask questions related to SXSW itself, like asking if they have gone to different exhibits, what parties they have gone to, and even what they have eaten so far at SXSW.

What it comes down to is SXSW is a huge networking event and you have to be open to meeting new people. These people will probably be influencers and potentially great qualified leads. However, you can't walk up to people asking those "qualifying questions" instead, getting to know them and then if they are the right fit you can open the door for them to become a potential customer.

Grab their business card if you can and plug them into something that will help nurture these relationships (hint, hint, wink, wink Contactually can help!) long after SXSW.

Typically at trade shows there is at least one grand finale party, but as I mentioned before SXSW is not your typical trade show. Imagine that grand finale multiplied by at least 100 over the course of 4 days. I'm probably underestimating this, but there will be parties everywhere ranging in different sizes. This is your chance to network like crazy and to meet as many people as possible. There will multiple parties going on at once and I would plan to attend a few in one night, rather than just sticking with one the whole night. Attending these parties open you up to networking.

To take it a step further, coordinate with people who you are meeting to join you at these parties, ask what parties they are going to, and then try to go to both. This gives you the added advantage of connecting with the people you want to meet with and opens yourself up to meeting people in their network.

If you are in the technology space and/or work at a startup, SXSW is an event you don't want to miss. Some of the Contactually team will be there, ready to attend parties, attending parties, and meeting with some really cool people. Give us a holler in the comments below if you are going to be there -- we're hosting a Contactually Customers + Friends party that'd we'd love to see you at! Sign-up below if you can make it... 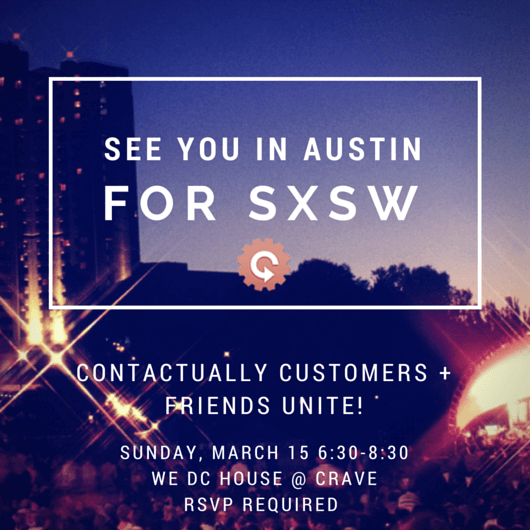