Networking Tips to Get the Most out of In-Person Meetings 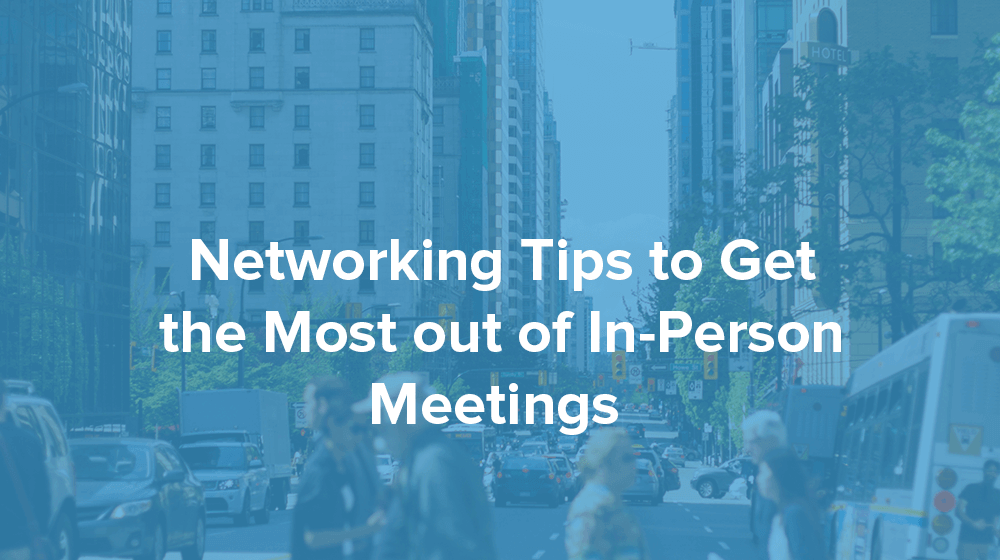 Editor's Note: This blog post was originally published on Ray Access' blog. You can see it here.

We believe in the power of networking. For local marketing, face-to-face networking has provided us with a local web of clients and partners. These connections serve several business purposes. They've:

In short, networking is a valuable tool for increasing your local business. We [Ray Access] think so highly of networking that we've written about it before:

Networking tips don't end there. While these two articles offer valuable advice for any businessperson, you may want to know more. There's certainly plenty of other questions you may have when it comes to networking. For example:

It's a tall order, especially if you're an introvert given to mumbling in a one-on-one conversation. It's OK. If you use these networking tips, you can still be yourself and leave a positive first impression. To get to a good place in the conversation, remember three essential networking tips that will serve you well:

If you can act on these three networking tips, you'll leave your mark on the person or persons with whom you've spoken. Networking at a business event isn't much different than making the rounds at a party. You want to be entertaining, yet learn a little bit about the people you don't know. So your approach should be the same: ask interesting questions, let them talk and don't talk business unless someone else brings it up.

You'll fail at networking if all you can add to the conversation are generic comments on the weather, the economy or local sports. In fact, whenever we hear someone mention the weather, a bomb goes off in our heads warning us that this conversation is turning tragic. So we work hard to turn it around. If successful, we not only rescue a conversation from oblivion, but we end up building rapport. Other people, consciously or not, understand the conversation-about-weather time bomb.

Granted, we're writers, so we know a little bit about a lot of different topics. We can draw on the research we've done in many medical disciplines, hiring practices, real estate, marketing, education, website development, or even disaster recovery and plumbing, just to name several. Our clientele take us all over the map in terms of subject matter, and we're always eager to learn something new.

But you too can do what we do with a little practice. It's a matter of listening attentively and thinking of something valuable to add to the conversation. For example -- and this is an easy example -- if someone comments on the weather (especially after an uncomfortable pause), turn the conversation back on that person. Ask him if the current weather pattern reminds him of his hometown or if it's any different from where he grew up. That question can spur a whole new conversation.

Staying with the topic of the weather, there are other questions that can reinvigorate a conversation. In the meantime, the answers tell you something new about the person you're talking to. Everyone has a weather-related story. Ask about it. Ask about the most favorable place, regarding the weather, that the person's lived. Ask about the favorite season, but probe to get reasons. Never ask a yes-or-no question, or if you do, ask follow-up questions.

If the subject of work comes up, as it often does in a business networking event, don't stop at asking what other people do. Ask what brought them to their profession. Ask what they like most (and least) about it. It's one thing to know what a person does; it's quite another to know why.

Once you get on the subject of career, it opens a whole window of past experiences that can really shed light on the person's personality and work history. You're not being nosy; if someone prefers not to answer, don't push it. But if they do answer, you're off and running on a conversation that will help you really connect.

When you're out networking for your business, keep in mind your goals:

Networking isn't about handing out business cards to every single person. If you connect with someone regarding your business, then it's OK to hand over your card, but in general, the best networking tips are about connecting with other people. Hardly anyone gets business directly from a networking event; it comes later, when someone you've met needs your product or service -- or better, when others refer you to someone who does need what you offer.

So venture forth. These networking tips will guide you as you hop from one conversation to another. Putting these tips into practice will help you reach your networking goals, which will eventually lead to the success of your business.