How to Make a Video for Your Business That Doesn't Suck

Some advice from someone who has paid their rent with video work.

The number one thing I do to help out friends with small businesses is basic video work. Why?

Well, first of all, video is everywhere, and a surprising number of people -- a.k.a. "potential customers" -- simply aren't willing to read very much these days. In the vast majority of cases, you don't necessarily need a video, but from a marketing perspective, not having one puts you at an immediate disadvantage.

Don't believe me? Send people to your video-less site, and wait for someone to say "where's the video?", or "is there a video?" You won't have to wait very long.

I can even do action shots.[/caption]

Second, video is a fantastic positive asset for anybody in a service industry, or space where credibility matters. A good video immediately separates you from the messy, untrustworthy world of vague websites and stock photos, and makes you "real" in the eyes of the audience. Moving imagery breaks up a big, unpleasant wall of text, and is a much easier way to convey certain kinds of information, like how things work.

So yes, everybody wants a video. Why do they need me to help, though?

You might have a great idea for a video, but it's really easy to ruin it with bad structure or creative decisions. And even if you manage to come up with a positively Spielbergian masterpiece, there are a host of production and editing challenges that can get you in trouble, and result in an expensive, frustrating dud.

As with anything else that's hard, a lot of people will try to address their video needs with contractors. If they're lucky, they'll get someone like me, who will refuse to do anything excessively ambitious (or charge a client accordingly), and will try to help them figure out the simplest viable project that meets their needs. Unfortunately, they may not get lucky, in which case they'll end up with something mildly embarrassing, slightly informative, and probably very expensive.

Don't let this happen to you.

Video is... actually not that hard if you plan.

Now that I'm not a consultant anymore, though, I can tell you a secret. Video isn't THAT hard.

Making a good video is all about focusing on what you can do well, and avoiding the things you're ill-equipped for. Executing something simple, extremely well, is much, much better than poorly or barely executing an amazing concept. Trust me. Ambition is at the root of a million terrible internet videos.

The key to avoiding that kind of scenario is planning. Not necessarily incredibly detailed planning, mind you, but THOROUGH planning. Don't leave fundamental questions about how you're going to do something -- especially if it's integral to your concept -- sit unanswered when you start doing actual work (or worse, hire someone to do it for you). It might only take ten or fifteen minutes to plan your video, but by the time you're finished, you should know exactly what the production process -- setup, shooting, editing, sound, music, etc. -- will consist of.

So you're ready to make a video plan. Great! Here are some tips for coming up with one that will save you ten times the amount of work it takes to make. 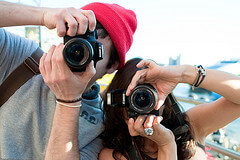 Video, audio, animation -- it's all a big part of conveying important, useful information to people. And that means it's important to Contactually users! Over the next couple of weeks, we'll be showing you how to tackle some of the most common media challenges, from bad sound to excessively large image files.

Rich media is one of the best parts of the internet. Learn to use it properly, and you'll find that really connecting with your network is easier than you thought.

One of the big problems with videos is that like marketing, politics, or sports, just about everyone has a lot of experience watching finished products, and little or no experience doing the actual work that's involved. We all know that he should have hit the tight end running the out route, because we're sitting in our living rooms with ten camera angles, while he's standing on a patch of grass with a facemask on and seven guys trying to kill him.

This is the most common challenge I have with video clients -- they have a very specific vision for a video, a relatively low maximum budget & time window, and literally no idea how those things affect each other. Something may seem extremely common to you -- an animation, for instance, that illustrates a concept -- but there isn't necessarily a button you or your video production person can hit to just make it appear. This is especially confusing for the uninitiated because for certain things, there IS a button. Simple titles, transitions, and even some goofy things like space backgrounds, are really, really easy to add in things like Final Cut. The problem is that many of these simple things are pre-rendered and either very difficult, or literally impossible, to customize.

This is one of the reasons that I think it's important for anyone who needs a video -- even if you're going to hire someone else to do it -- to mess around with basic video editing and get an understanding of what's easy, and what isn't. Great product managers don't have to know how to build their own apps, but it sure goes a long way if they've at least TRIED to do it in the real world. The same thing is true for building any kind of multimedia.

Most people are pretty good at visualizing what they want the end production to look like -- that's the easy part. The hard part (and the much more useful part) is visualizing what you'll actually have to do to make the video come to life. If you're picturing a scene, where is it physically being shot? Who is filming? Where is the camera? Do you need more than one camera, or can you shoot multiple takes and then edit it? If you're editing it, can you perform the scene the same way twice, or will it look weird? Where is the sound coming from? If you're using screen video from a phone or PC, how do you plan on capturing it?

Cutting is kind of a paradox -- it's the saddest, most frustrating part of finishing a video, and it's also usually the difference between success and failure. Cutting things is hard because you've put effort into so many things by the time you cut. You set up the shot, you wrote the scene, you filmed everything, and now you're just going to dump it? This is why people develop sentimental attachments to elements of a video that hurt it's effectiveness.

One of the easiest ways to avoid this difficult decisions is to make them BEFORE you put all that work into them. While you're visualizing the production tasks involved in making a scene, think about how that reality will affect the finished product. If it sounds like a really difficult to scene to get right, don't wait until you've put in hours of work filming a bad version of your idea. Cut it in the planning stages.

Here's another challenge for your idea. Your imagination has an infinite screen resolution, and no aspect ratio. Everything is clear, all assets are properly rendered, and you can hear everything perfectly. It's like that scene from "The Matrix" where they're in that white room just making stuff show up.

The real world... is not so ideal. Gritty, smelly, real-world execution is often the only difference between a good video and a bad one, and a big part of doing that well is translating ideas in your head into ideas that work in a real-world format. If you have pictures to show, they'll need to be sufficiently high resolution, and then cropped, so they fit your video's dimensions. Lots of things -- complicated software, for instance -- look TERRIBLE at full size in a video, or don't fit normal video aspect ratios. For live-action, many spaces (your garage, the conference room) are much smaller than you realize, and the camera captures less of them than you'd think.

All of this can be anticipated (and cut or adapted) in the planning phase. Walk around with your phone, and shoot some test video of different places you're thinking about using. Check out your digital assets, and see how big or high resolution they are. If you realize you're going to need something like a wide-angle lens to make your vision a reality, see if you can obtain one, or tweak your vision. Trust me, I took a Film Study class in college, and I attended at least two thirds of the lectures. We talked about this sort of thing.

Tip #5 - Realism is not necessarily negativity

I've made a lot of videos, and a lack of sufficient planning has been the root of almost all my challenges. For me, nothing sucks more than disappointing a client, friend, or co-worker after you've gotten them excited about how great something could be. As a result, I'm very realism-oriented these days, and I rely more on great execution of simple ideas to make these people happy.

For people who work with me all the time, or have asked for my help because they've seen my prior work, this is no problem. Still, it's easy to get a reputation as a bit of a killjoy when you're constantly telling people their amazing idea is going to be too difficult, complicated, or expensive to produce well. So try not to be negative about the whole thing; remember that you're asking these questions to enable high quality and great execution, not to shoot down interesting ideas. Sure, the adrenaline high of brainstorming your crazy video may lose some of its potency when tempered with realism, but your end product will be infinitely better.

Next Post
Here's How Using Google Analytics Incorrectly Can Hurt