The Psychology in Using Gifs, Memes, and Emojis in Your Emails 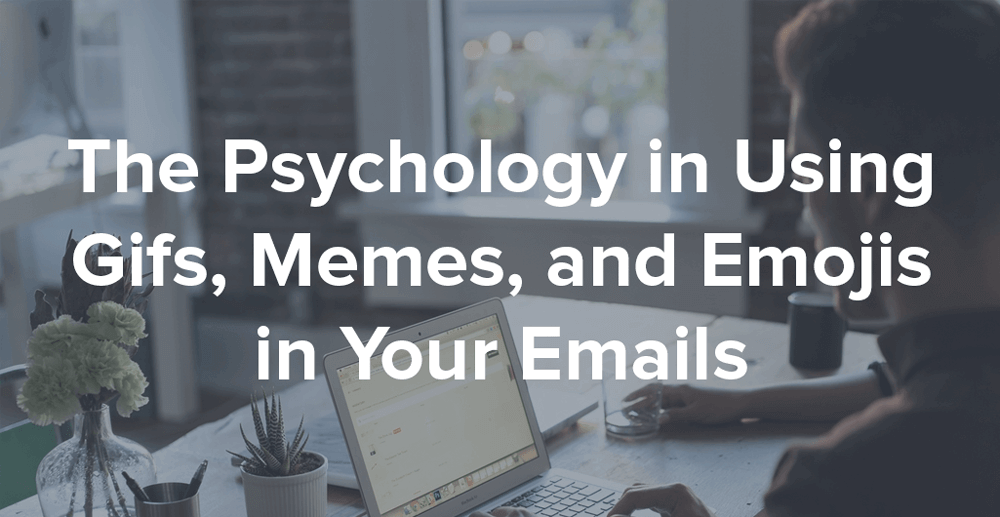 If you've been anywhere near the Internet or used your mobile device recently, you've probably noticed a few trends in the form of emojis, memes, and gifs. As they multiply and proliferate across every screen, website, and even into your own correspondence, we're faced with the predicament of if and when to utilize them in business situations. Is there an appropriate way to implement a gif when you email your boss or a new client? How about emojis? It feels like you can't send or receive an text message these days without expressing your emotions with several emojis.

First, if you're feeling completely lost, don't worry we'll break down the differences of all the Internet trends for you. Then we'll prove that there's some psychology to it all, and why utilizing an emoji or meme may be a great choice for the next business email you send out.

Before we start, we'll share our definitions and examples of our Internet trends and sensations so we're all on the same page, here.

GIF stands for graphics interchange format, and it's generally a short video that's captured from a TV show, movie, or pop culture that repeats...endlessly. Generally they're short clips and you may even see them utilized as an animation on a website that directs you how to do something.

A meme isn't quite so easily defined. A meme is technically an idea or behavior that's spread rapidly throughout a culture. But for the sake of simplicity, we'll keep our definition to Internet Memes, which you may recognize as those viral images with text overlays. They have a bit of an inside joke kind of feel to them and often there is a back story to the image used in the memes...so be wary before you send one out to the whole office! 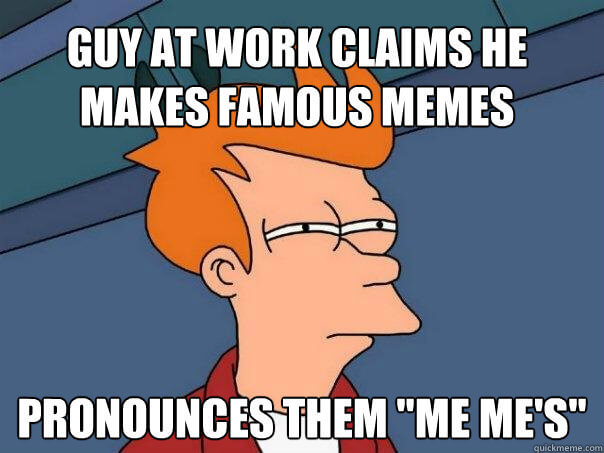 Last but not least, the emoji. ? ? ? ? ? ? We love our emojis here, and it's rare that we send a text or tweet without one...or four. If you haven't already added an emoji keyboard for your smartphone, we highly recommend it. If you have a Mac, you can use emojis straight from your keyboard (Control+Command+Spacebar). There are hundreds of emojis out there and they are all based from the Unicode Consortium.

We've heard the argument before... the rise of text messaging, 140 character Tweets and Internet-speak has lead to a generation of the Internet savvy who struggle with grammar, literacy, and writing in general. The naysayers argue that the use of emojis is damaging our ability to communicate and while this may be true for young children who are still learning how to properly communicate, it may not quite affect us adults in the same way.

Before you brush off the use of emojis and gifs in professional situations, think about how often you read body language and emotions when communicating in-person. Have you ever received an email and not known how to read or understand the tone of it? We've all been there before. Without facial expressions, intonations, and general body language, we're left to interpret the neutrality, or lack thereof, in the intentions behind the words.

But, rather than making us worse communicators, emojis allow us to express emotions that may have been lost before and 72% of young people (age 18-25) surveyed in the UK say that the use of emojis allow them to better express their feelings. While feelings may not always be the best thing to share in the office, emojis can act as a stand-in for gestures, tone, and body language, something we regularly share at work and with our co-workers. 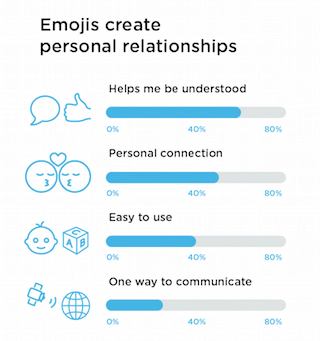 In a study done by the emotional marketing company Emogi, it was found that people utilize emojis because they believe it helps them to be better understood, and to create more personal connections. Plus, research has shown that people often react in the same exact way to emojis as they would react to a human face. That's amazing! We've so engrained emojis and the like into the culture that we've taught our neurological response to react as we would to someone talking to us in-person. But don't be fooled, while psychology is telling us to use more emojis and gifs in our communications, it doesn't necessarily mean they're quite acceptable yet in the workplace.

You brain processes what it's seeing on video 60,000 times faster than it processes text. That's pretty darn quick if you're asking us, and it means that the quick GIF you included in your email is more likely to elicit an understood response from your contact than had you included a bad joke in written form. When you're reading, it takes an active mind to read, process, and fully comprehend the words on the page, it takes a lot of brain power to do some fully focused reading.

But, videos allow us to be a little more lazy and use a little less power to understand what's happening on the screen in front of us. How often have you gone through your emails during your afternoon slump and missed some critical details? There's a good chance that the emails you've sent have even been overlooked by your tired contacts. Including a GIF is a great way to catch their attention and get your point across in a nearly universal manner...that will even make sense during the sleepiest of afternoon slumps.

The coin was termed in 1973 by Richard Dawkins at University of Oxford...and he definitely didn't have our Internet memes in mind at the time. The definition refers to the transference of ideas and how it changes from person to person and adapts to fit the culture around it as it evolves. In the case of those viral memes you see across social media and sometimes even printed off on bulletin boards in your office, you're getting more cultural references and catch phrases.

The sharing of catch phrases allows for some bonding between those sharing them, as if they're in on an inside joke together, since there's much more behind what's actually being said. Looking to form a bond with a tough client or co-worker? Do some research, you may discover their favorite cultural reference that you can easily turn around into a shared joke over a meme.

The Power of Laughter

At the end of the day, you're most likely sharing that meme, GIF, or string of emojis to elicit an emotion...and hopefully it's laughter. How often are you laughing a day? That number tends to decrease as we move into adulthood, and while we can't be as carefree as we were as kids, sneaking in a couple extra laughs a day can have some positive impacts on our life. Laughter is often at the core of a healthy relationship, and that goes well beyond the relationships between spouses! It brings you closer with the person making you laugh, or who you're laughing with, and what better way to form a relationship, especially a work one, than on a good giggle?

Laughter has been proven to help improve social and non-verbal communication and plays a crucial role in group bonding. Sending over a meme or GIF that gets a laugh out of your co-worker or client is a great way to form a powerful and possibly long lasting bond, an especially crucial aspect of your business if it's built on strong relationships.

When does it work?

First and foremost, know thy audience. But when 92% of the online population is an active user of emojis, there's a good chance you won't come across anyone who's confused at those little yellow faces. But in the case of GIF's and memes, you may not have the same kind of luck. These tend to be fairly culturally specific and have a better chance of falling flat. At the end of the day, across the board, mind your context.

You've got hundreds of options when it comes to your emoji choices, there's bound to be at least one or two that fits in with your email's content. Why confuse your contact with an email about your upcoming coffee date and include the hamburger and beer emojis? The same goes for all your favorite memes and GIFs. Your favorite meme may not be applicable in all situations...no matter how funny you think it is.

It's also key to keep in mind that not all email servers support emojis and instead of getting those hearts and rainbows, they're seeing little grey boxes...not quite the message you want to send, when you're trying to convey emotions. Be wary of Outlook here, your emojis may not translate for you!

The same goes for GIFs, if the email or browser doesn't support your dancing GIF, all that excitement won't translate the same way with a still image. Now, we love GIFs here at Contactually, and you'd be hard pressed to find a team email chain that doesn't have a couple sprinkled in here and there.

But our rule of thumb? Put that GIF at the bottom of your email! It has the power to distract from your message when you lead off with it, so leave it as a little GIFt for your recipient at the end. Our CEO, Zvi, shared that his rule is to never ever use a GIF in a first contact email...and that often those outreach emails he gets from a new contact that have a GIF, he discredits pretty quickly. The lesson? Wait till the relationship is established.

The Time is Now

Much like any other trend or joke, there's a lifespan. Don't be the guy sending out the same meme or GIF in every email that goes out to your team or clients, but in the age of stale email communications from one side of the World to the other, what's the harm in adding a little color or emotion? Eliciting a smile from a co-worker, prompting the open from an emoji-filled subject line to a client, or setting yourself apart from the crowd of your competitors by grabbing your customers' attention, may be worth taking the risk of sharing your favorite emoji or GIF! 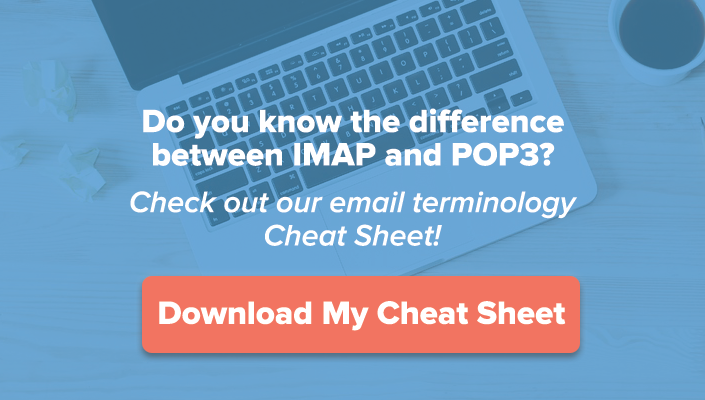