Getting healthy with standing desks 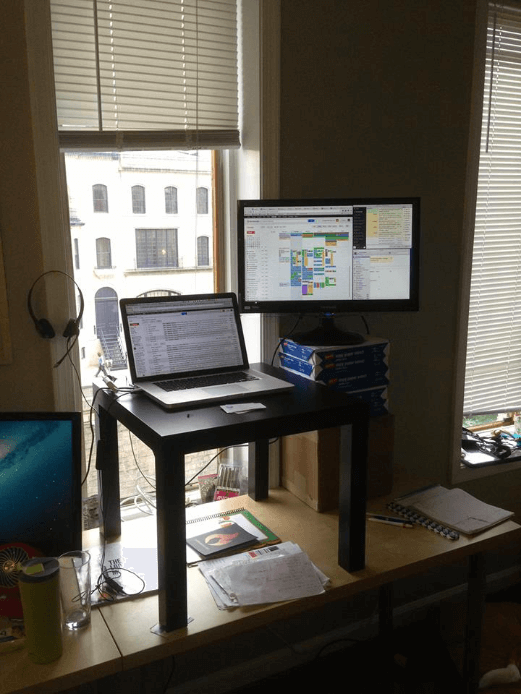 Doesn't it feel like standing desks are all the rage these days? They seem to be everywhere. Out of our team of 13 in D.C., we have seven people using standing desks. Well -- they're make-shift standing desks (see photos), but what matters is that we're standing and using a desk, right? It's supposed to be great for your back, your posture, and your overall health in general.

It all started with Zvi who decided that using a standing desk something he needed to do. And since then, six more have joined the club, with a few still contemplating the switch. So what does our team think of standing desks?

Zvi - I'm loving it. I feel a lot more energy over the course of the day, and makes me appreciate sitting even more. I have to ensure I keep headphones, to keep me from wandering away from my desk. Comfortable shoes are a necessity!

Donna - I think too much of either is bad thing. It's known that sitting too much can cause health problems such as increased risk for heart problems as well as back problems. But on the other hand, standing all day can also cause problems especially later in life. If you look at people in the past that had to stand all day such as in factories, they tended to have more joint or knee problems when they were older. So I think just like anything in life: everything in moderation.

Bill - I started using a standing desk when I injured my back. It hurt to sit, and I knew that sitting would delay the healing process. I was surprised, however, to find that I was more focused on work and accomplished tasks faster. Maybe it's because standing takes effort and muscle which helps circulate blood. Or maybe I just hate standing and my brain thinks if I get this done sooner I can sit sooner. Either way, I haven't sat down at work since.

Ouzy - Having used a standing desk for two weeks, I can honestly say that I love it. I was skeptical at first but decided to try it out once we got a few more empty lying around the office. It does take some time to ramp up to standing for a whole work day, and I would strongly advise not to dive head first. Take it slowly, and your body won't hate you.

Curious to see what our standing desks look like? Here are a few from the office and from our friends: