Five ways to focus in a world of distractions

We're distracting you with warnings about distractions now?

This College Humor video was making the rounds the other day.

It's pretty good, in an intentionally un-self-aware meta kind of way, since College Humor has been baiting us into opening new browser tabs since before browsers even HAD tabs, with content like this from when I first got to college more than ten years ago.

Just seeing that video takes me back. In August of 2000, when I watched this for the first time, there was no YouTube. You literally downloaded this video file to your laptop, and it was up to you to figure out what to do with it. There were no advertisements in it, no annotations that popped up. Just the fact that it was digital video of a place you recognized (this was filmed at my school a few years before I got there, from what I understand) was kind of amazing. And yet, everybody saw it. It went "viral" before the capacity for dumb videos to go viral even appeared to exist.

For a few months after I got to school, I had the literally unbelievable combination of Napster, and high speed internet. Two weeks before, I was downloading MIDI files of Green Day songs with my parents' dial-up modem, and all of a sudden, I could get literally anything I wanted, whenever I wanted in like, two minutes.

Meet the last of the analog children

Lately, I've realized that there's a sub-generation of people, of which I just so happen to belong to, who all experienced this kind of thing. We didn't grow up with the level of distraction that's par for the course right now, because it didn't exist. But when it finally arrived, we were the perfect age -- somewhere between fifteen and say, twenty five -- to learn how to adapt to it. Today, as functional adults, we can handle the information hose almost as well as kids who really DID grow up with it, but we're lucky enough to be in it, not of it. In theory at least, we know what we're giving up by plugging in.

This is a really important perspective that I think many people in this cohort take for granted. My parents can't empathize with a teenager trying to survive high school in the Facebook/Instagram era, because they barely even know what those services do, or what kind of impact they have on people who aren't grandparents swapping baby pictures. Meanwhile, actual kids in high school know of no other reality. Telling them to put down their phones and "live life" is patently absurd, because that's where the things you experienced at their age happen now.

Neither of these two groups ever had to make the choice that seems to face everyone now -- when and how should I be connected? What are the costs and benefits of being on or offline, and where's the sweet spot for being the happiest, most productive, and most fulfilled? How do I focus in a world of distractions?

If you decide to get rid of the internet, or wear an always-online face computer, you're avoiding the question. The benefits and challenges of ALWAYS being online, or COMPLETELY disconnecting are obvious, and for the vast majority of people, impractical. What's really important is how to find the right spot in the middle. How can you make yourself smarter, more aware of useful things, and more thoughtful with a combination of communication, information, and quiet-time? When is the Twitter firehose a pointless time-suck, and when is it a brilliant hive-mind of creativity and collaboration?

I can't cook, and I can't dance, but this is one thing I'm pretty good at. So here are a few general tips.

1. Get an RSS reader 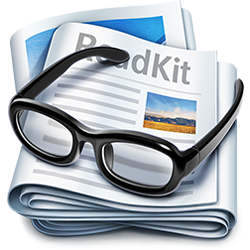 I'm a happy ReadKit customer -- don't know what I did without it.[/caption]

I can't recommend this enough. Social news has a lot of serious issues -- it plays right into the hands of page-view journalism, there's a huge confirmation bias problem, and maybe worst of all, it's endless. RSS feeds allow you find real sources of information that you trust, and experience them, completely, over time. When there's nothing good to read, you'll know it at a glance, instead of scrolling down your News Feed looking for a dopamine hit. Plus, good mobile RSS readers save things for you to read offline, which makes them great for subway rides, airplanes, and other disconnected situations where reading something intelligent is actually a good use of your time.

2. Break your internet on purpose

I go to Panera almost every day I work from home, because they kick me off the internet from 11:30am to 2pm. Sure, I can't do this if I have a bunch of work to do in Wordpress, or another web app, but if I'm reading or writing, it's great. I still have my phone for music, and the occasional animated GIF from my coworkers on Hipchat, but when I reflexively look to refresh Twitter on my laptop, it just... doesn't work. And that means that I do.

I read a bizarre assessment of Twitter once that cited the services lack of automatic curation as its biggest problem. Apparently, for many users, there's just too much to read. Fortunately, there's an easy solution.

Don't follow so many damn accounts! Don't "like" your stupid phone company, or your friend's windowpane replacement company, or your subdivision's lawn service. If every magazine was free, would you subscribe to them all? If you feel socially pressured to follow things you don't actually care about (I've learned to ignore this, but not everyone can), make frequent use of your social network "mute" functions. And of course, if you take my RSS reader suggestions, just follow a few sources at first, until you get a good sense of how much you can realistically process each hour/day/week. Remember, just following something doesn't make you any smarter unless you not only see, but actually read and process the information from that something. I can follow SCOTUSBlog and stuff on international trade, but if all I'm doing is skimming the occasional article and liking headlines I already agree with, I'm not actually getting anything out of the process except maybe feeling a little more sophisticated.

Sometimes the firehose is not just okay -- it's great! Learning to process a ton of information is awesome, provided you do it for limited amounts of time when it makes sense.

For example, I'm a huge professional basketball dork. I absolutely love it. So there are two times a year -- the NBA Trade Deadline, and the NBA Draft -- where I spend all night just sucking down every bit of information I can get. Rumors, arguments, hypotheticals, everything. Most of it doesn't go anywhere, but it's exciting, interesting, full of fun thought exercises, and a great chance to discover new authors and sources I may want to follow (less intently, of course) on a regular basis. Then, when the event ends, it's back to my regular routine of checking things once a day, or a few times a week.

You don't have to treat the internet like a newspaper from 1988. Use it for what it's good for, as long as it's for something you actually enjoy.

5. Use your offline brain when reading online material

Guys, it's satire. Use some common sense.[/caption]

There's no shortcut for this, no mobile app, and no social network. But when you see something interesting, DON'T JUST SKIM AND SHARE. Don't send links to people with nothing but "interesting!" in the body of the email. Read the whole thing, or at least most of it, think about what you've read, form an assessment, and share THAT along with the article. You're a smart, interesting person -- content that's worth sharing should cause you to generate some kind of interesting reaction. If it doesn't, just move on, and stop polluting people's inboxes, Twitter feeds, or whatever.

I have a Facebook friend who is obsessed with convincing everyone to be a vegetarian. Every time there's something on the internet about it possibly being bad to eat meat, BOOM, it goes on the news feed, without any additional thought. I don't know if she's read it, I don't know if the article is brilliant or bogus, and now I just roll my eyes when I see it. She's no dummy, but if this is how she uses the internet, she might as well be an automated script.

Now go forth, and drinketh from the uncapped fire hydrant of human experience!

We live in the information age, and for the most part, it's great! But yes, if you don't know how to handle it, whether it's because you're still adapting, or because you were born into it and don't know how to pace yourself, it can be an awful, mind-fattening experience. If you can avoid being intellectually lazy without becoming a luddite, though, it can help you become a smarter, deeper, more interesting you, connected in all the good ways, and independent in all the necessary ones.
Next Post
The easy way to share useful content with key relationships