Not Everybody is Created Equal: Rating Your Network to Get the Most From It 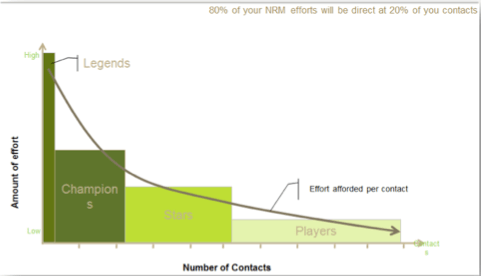 The Problem with Large Networks

Let's face it: many of us have large networks that violate the principle behind Dunbar's number, which says we can only actively manage 144 relationships. If you, like me, have over 3,000 contacts, you're probably in a bit of a bind because there's no way you can properly manage your group without tools or strategy. One of the most effective concepts is to focus your time on the people that matter most to you. What matters most to you depends on the objectives you're currently pursing. To define your relationship objectives, read this blog post to help you evaluate the things for which your network can help you.

You Know your Relationship Objective: Now What?

Even after defining your objective, there might be more people than you can actually handle so it is worthwhile to segment your database and focus on a specific group, which you can accomplish by rating your network. At Mindmavin, we developed a rating method that we have deployed numerous times and seems to work for a lot of folks. Take a look!

This rating methodology is not to evaluate how much you like a person, how great that person is or how much you aspire to be like that person, but rather an assessment on how effective this person can be in helping you achieve the growth objectives of your business in the form of referrals.

We recommend the following rating structure:

You'll notice that our ranking words carry a specific definition. We believe it is easier for your mind to actually associate people to a certain group rather than with a number or an amount of stars. That type of rating often produces arbitrary results, which prevents it from being as useful as we would expect. If you design your own rating mechanism, it is important to keep it simple with about 3-5 variables. We opted for 4, which is really like 3 (you'll soon understand why). Let's dive in and discuss each of these variables.

Legends are the most important people you know professionally, and often comprise 5% or less of your network. They are powerful supporters of your current business objectives. They have the ability and drive to help you secure high-quality deals, driven by their exposure to said deals and the quality of your relationship. Mindshare positively impacts both of these variables. Some are Legends because they are very well connected or are high-value people that you have unique access to. At any given time, you want to keep your mindshare at 100% and work to deepen the relationship as much as you can. I recommend keeping that bucket to a maximum of 30-50 people by forcing exclusivity. Why? That is a group of people that, no matter what, you'll be able to pay enough attention to and since they are so important to you, it will be worth your time. If you don't do so, you'll be leaving money on the table.

Champions are people that you see as highly valuable. They are important people in your professional network and potential future Legends. They regularly help you with your objective, and as a group the Champions provide you with a significant amount of value. In addition they are highly effective in sending you NRM Opportunities. Champions are impressive people you want to keep relatively close to you, but aren't quite as powerful or amazing as a Legend. Naturally, you will have more Champions and use a little less effort to keep track of them, but will still be able to do so effectively. They are people with whom you want to retain a high degree of mindshare and share a strong relationship.

Stars are professionals you respect and with whom you have a well-defined relationship. You'll keep track of these people to see where they're headed career-wise. They are more than a business card exchange or a conversation consisting of small talk. You might have met your Stars more than once, or see them regularly because you're part of the same networks. These are people that you can leverage at any point because your relationship will always be warm, allowing you to request a favor from time to time.

Players are basically everybody else - it's that simple! Every other person you know where you may have received a business card, had a nice 5 minute conversation at a networking event, or that you were introduced to by a trusted contact but never went anywhere further than the introduction. These are people that you have a relationship with but they are, from a quality standpoint, at the low end. We also see the Players value as the holding bin for everybody in your network that isn't valued higher which explains my comment about why it's really only like 3 ratings. There are the Legends, Champions and Stars then everybody else (i.e. Players).

How can you go about rating your entire network?

This isn't a burden like some people think and you can breeze through it in no time. There are two ways:

Focus on 30-50 Legends and utilize a tool like Contactually that allows you to actually import all of your contacts from the various address databases you have. Once you've done that, it will allow you to create buckets to name and add all those people you would consider Legends into it. Then, look at the list in Contactually and see how many of them haven't heard from you in the last 30 days. If this is more than 20-30% of your Legends bucket, you know you are leaving money on the table simply because of the way we defined Legends as people who have sent you attractive referrals in the past. When you don't contact them regularly, you lose out on valuable mindshare. To understand that process a bit better, I recommend looking at this article.

This option is an investment of 2-3 hours, which you can spread out over several days 10 minutes a day. I recommend using Contactually but this time, create buckets and use the bucket game they offer to get people into the buckets. What is really neat is that they have keyboard shortcuts that make it relatively easy. You will have a record to beat: my record is 53 seconds to rate 50 contacts in that bucket game.

The secret I have is that most of your contacts will be Players so you can get trigger happy on the Players key. Therefore, you will get really fast. Just make sure you don't incorrectly categorize people of high value. Take care to extract value from this exercise. You can do the math: if you want to rate 1,000 people and you can get to 50 in less than a minute, you will notice that getting all 1,000 people rated will take you less than 40 minutes (with breaks)! If you have 2,000 people we're only talking about an hour and a half. This is absolutely doable and extremely powerful. You just have to make sure you accomplishing this in an acceptable speed.

You'll end up with a rating structure in place that allows you to focus on the people that matter most in a very easy way. It will help you determine how much effort to put into the folks at the different rating levels. The graph below shows how we would typically recommend you spend most of your effort: 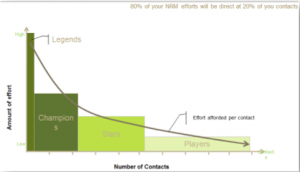 As you can see, there's a lot of effort going to the Legends even though we only have a few of them. In contrast, there is very little effort being given to Players although they contain most of our contacts. Specifically with the Players, the key is to utilize more of the classic marketing strategies to reach out to them such as Newsletters and other emailing tactics.

By rating your contacts you're empowering yourself to know ahead of time where your effort should be directed. This will save you time and energy that you were previously using on contacts that didn't return any value to you. Just that alone indicates just how worthwhile rating your network can be!