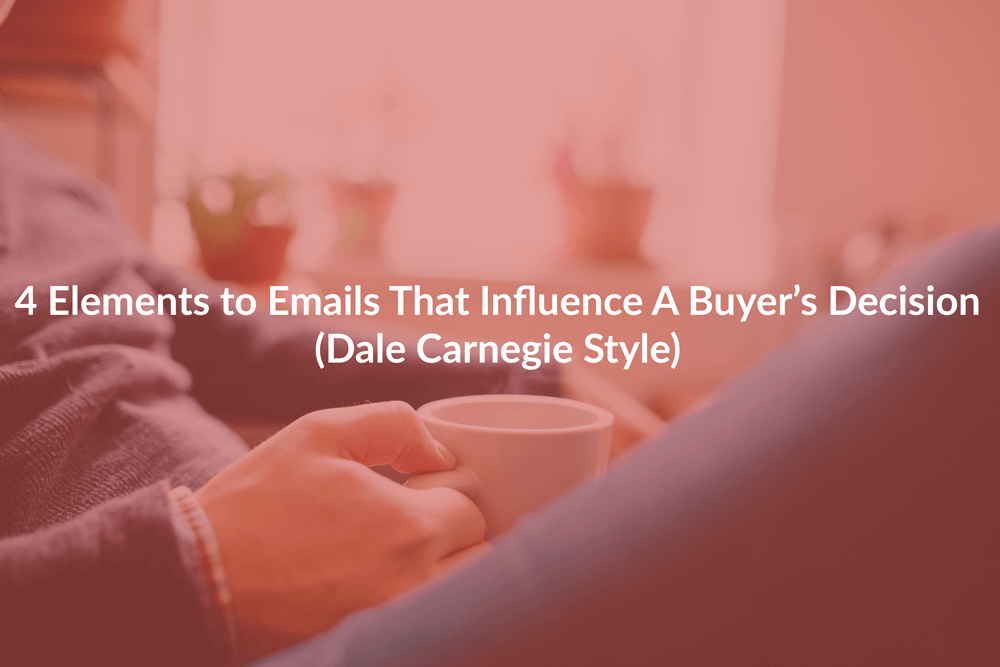 "You can close more business in two months by becoming interested in other people than you can in two years by trying to get people interested in you." - Dale Carnegie

I'm about one chapter away from completely finishing How to Win Friends and Influence People by Dale Carnegie and I would just like to say...Dale Carnegie is the man! Ok, that sounds cheesy, he really understood people and how to teach others to understand what humans really want. I'm not saying his principles are ground breaking, new teachings, but they make a lot of sense today when you are trying to get someone to buy your product.

I also recently read an article on Hubspot, Salespeople, Do Not Send Me This Email, explaining two examples of bad emails from salespeople. The unfortunate commonality with both of these emails was that these salespeople were only talking about themselves and the company they represented. What do you think the recipients of these emails thought?

Emails that influence a buyer's decision...

How do you write emails or effectively reach out to prospects, leads, and/or potential buyers to influence their decision?

How Dale Carnegie Breaks it Down:


In the beginning of How to Win Friends and Influence People, a chapter specifically dedicated to "Fundamental Techniques in Handling People," Carnegie exclaims, "...The only way on each to influence other people is to talk about what they want and show them how to get it."

It makes sense at first glance, but I'm sure you're beginning to wonder how do you even start to get other people to do what you want them to do?

"If there is any one secret of success, it lies in the ability to get the other person's point of view and see things from that person's angle as well as from your own." - Henry Ford

It's not just about the other person or you, but a merge of the two. Dale Carnegie's example is in letter form, but for the sake of this piece and the digital age, it fits very well in terms of emailing someone.

The letter that merges the concept of Henry Ford's quote is as follows:

Your company has been one of our good customers for fourteen years. Naturally, we are very grateful for your patronage and are eager to give you the speedy, efficient service you deserve. However, we regret to say that it isn't possible for us to do that when your trucks bring us a large shipment in the late in the afternoon, as they did on November 10. Why? Because many other customers make late afternoon deliveries also. Naturally, that causes congestion. That means your trucks are held up unavoidably at the pier and sometimes even your freight is delayed.

That's bad, but it can be avoided. If you make your deliveries at the pier in the morning when possible, your trucks will be able to keep moving, your freight will get immediate attention, and our workers will get home early at night to enjoy a dinner of the delicious macaroni and noodles that you manufacture.

Regardless of when your shipments arrive, we shall always cheerfully do all in our power to serve you promptly.

You are busy. Please don't trouble to answer this note.

Obviously, some of the specific pieces of information in this letter come across as a little dated; however, the overall concept is extremely relevant in emailing your prospects to influence decisions of those individuals and a fruitful outcome for you.

So, how can we break down those concepts for the digital age?

Elements of Emails that Influence a Buyer's Decision

In the example letter above, the first sentence shows that some research was done to see that the company he was researching has been a "Good customer for fourteen years." Maybe some records were looked at, but this is the best place to start for your email.

The usage of social media is at it's highest with 74% of online adults using social networking sites, a perfect channel to start in researching the person who you are about to email. Granted, this may sound like social media "stalking," but it's the easiest outlet to get caught up on what this person is doing. You can see if they got a new job on LinkedIn, see what topics they are talking about on LinkedIn, and/or take a look at the pages they have liked on Facebook.

One service, that LinkedIn acquired last year, Newsle, can give you notifications on if someone was mentioned in the press or wrote any recent articles. This is a great sales tool to keep updated on the earned media of your own network.

Doing your research before your email can give you an arsenal of information to establish connection with the other person to let them know that you are in tune with what they are interested in or any achievements they may have gained.

Gaining this information from the research above gives you relevancy to the conversation, but the missing piece that you cannot forget about is the authentic component. Ultimately, we know what we want out of the email, but remembering our Dale Carnegie teachings it tells us that the other party couldn't care less. Although, your prime concern may be your own priority, your well wishes that frame your argument could come across as inauthentic.

People can detect when someone is being inauthentic even at the earliest stages in their lives. In an experiment with 19 month old infants, they detected inauthentic emotion and did not just take "emotional communications at face value...[And] are sensitive to features of emotional contexts beyond what is expressly communicated by the adult."

Authenticity, is essentially one of the keys to if someone trusts you and is willing to listen to what you are saying.

There is a natural give and take with the letter above, without any fake compliments to fluff the letter. The first paragraph lays out the problem and then the following paragraphs outlines a genuine solution that benefits both of the parties.

Although the letter above does give both sides of the situation, there is an extra layer of empathy and compassion. It's clear that the delays probably made the sender frustrated, but as Carnegie states frequently in his book, talking about your own problems will get you no where. The sender tells the recipient of the congestion the delays can cause and then appeals to the recipient on how if the deliveries were made earlier his own workers could get home at a reasonable time to enjoy the macaroni his workers are delivering.

At the beginning Carnegie lays on the empathy, "Because many other customers make late afternoon deliveries also. Naturally, that causes congestion. That means your trucks are held up unavoidably at the pier and sometimes even your freight is delayed." He understands the problems that the recipient faces and addresses those. Our brains feel pain and empathy in the same places, so there is this pre-psychological empathetic connection when you take the time to address the other person's problems.

Take the time to put yourself in the other person's shoes to see the problems they are facing and ultimately the benefits that they could reap (with your help or insight). A little empathy and compassion can go a long way, especially in influencing a potential buyer.

These emails of influence shouldn't be just fluff, there should be a clear goal at the end. What do you want your recipient to do? How would you measure the success of the email? At the end of Carnegie's email he clearly states an action for the recipient; "You are busy. Please don't trouble to answer this note."

Make your email actionable with something that the recipient can move forward with. Don't dance around it, but be clear with that action. Do you need them to sign something, change a plan, or just schedule a time with you? Ask those things in the email. You can still have the framework that Dale Carnegie sets in his example letter with your requested actions as well.

There are many ways to email someone and I'm sure some salespeople have honed their own processes that might not include these things. However, people are seeking connections and want a salesperson that is their trusted advisor. Dale Carnegie's principles are a great example to use in order to help establish that relationship that buyers are seeking. With these Carnegie email attributes, you can then formalize your own effective process, optimize different aspects, and measure the results.