Why It Feels Like All You Ever Do is Answer Email 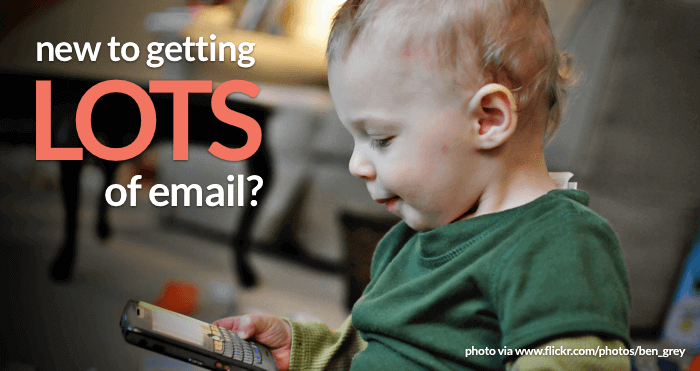 The modern currency of productivity

Email is a very sensitive subject for a lot of people. In a lot of offices, it's become a sort of work currency, where a person with a lot of emails in their inbox is a person who is faced with a lot of work. When someone says they've gotten to inbox zero, the assumption is that this is a pretty huge accomplishment, involving a lot of work. I've had many intelligent, hard-working colleagues at other companies who never seemed to MAKE anything; as far as I knew, they spent all day answering emails.

Until a few years ago, I always felt a little sheepish about this, because by comparison, I didn't really get that much email. In fact, if you emailed me at any point from 2004 to, say, 2010, you probably got an answer in about half an hour, provided that I had an answer to give. I even developed then-harmless habits that are now a huge problem, like writing friendly (but ultimately useless) replies stating "I'll look into it", or reading every email I get as it comes in. In the peak of my non-email-getting career, my wife was getting twenty emails for every one I received. Email didn't cause me stress. It was a break from my actual work!

And while I always felt a little guilty about the whole thing -- especially given how much everyone complained about their hundreds of unread emails -- I really shouldn't have.

Today, I understand why these people had so much email to go through, and why I didn't. They were all, in some way, "coordinators"; professionals who facilitated complex actions between a bunch of different people and interests. And while meetings and phone calls are a part of it, the fact is that email really IS the primary channel for the daily cat-herding that so much of this work consists of -- especially with people outside of your organization.

By comparison, my early jobs didn't really require me to coordinate anything. People gave me ideas, projects, or deliverables they needed built, and I built them. Sometimes I'd ask a question, or send them an early version, but for the most part "getting work done" involved me shutting my door and... well, just doing it. I was like a Nike shoe with a laptop.

There are jobs that can stay like this forever, but "entrepreneur" is not one of them. And like anyone who moves from a specialist at bigger company to a generalist at a smaller one, I learned this the hard way.

If you interested in things like building a business, or managing your network, you won't want to miss anything on The Contactually Blog. From email marketing, to media production, copywriting, and relationship building, we cover just about everything related to building a better version of what you do every day.

Sound interesting? Subscribe to the blog today, and you'll get a short, weekly summary of everything we post delivered right to your inbox. It's easy!

Over the last two or three years, my inbox -- and the number of people who end up in it for some reason -- has slowly expanded, until I found myself dealing with many of the same problems as my old coordinator friends. As someone who never used to have to deal with this, and who used to never find email or contact management overwhelming, the experience has been a little jarring. Had I gotten less organized? Lazier? Less conscientious? How was I so behind on so many conversations all of a sudden?

As it turns out, none of these doom and gloom scenarios are actually the case. The simple fact is that I'm involved in a lot more stuff these days; thousands of bit parts in hundreds of big projects, and that results in a ton of conversations. Today, I exhibit many of the signs of a "coordinator", whether I like it or not :

None of this is bad, but it's definitely distracting. Some of this communication is critical, some of it is frustrating, and some of it is just altogether unnecessary. And, somewhat perversely, my crowded, hard-to-manage inbox is now a bigger, more important part of my job than ever.

All of this makes for a tough transition from "do-er" to "coordinator". I think I'm doing okay so far, but it still didn't hurt that I took some time to read Zvi's "Entrepreneur's Guide to Relationship Management", clean it up a bit, and add some new material. I wish I had been able to read it before I jumped into the startup world a few years ago, that's for sure.

Starting a business -- or even helping someone else start one -- is a lot of fun, but it involves a whole lot of communication, and that can be overwhelming for the builders or the world to effectively manage. But make a plan, and stick with it, and you'll discover that being a coordinator isn't so bad, after all.