Copywriting to Your Strengths (How to Run a Drip Campaign, Part III)

{Ready to get started building a drip campaign in Contactually? Remember, if you weren't with us last time and want to learn the what & whys of drip campaigns (or just need a refresher), you can review Part 1 of this series here, skip right to Part 2 here, or gorge yourself on Part 4 here.}

It starts with finding your niche

I had a good friend in high school who was just sort of inherently good at any sport we played, even if he didn't care about it. He wasn't coached, and sometimes he didn't even know all of the rules, but within minutes he'd pick up the basics of whatever we were doing, and his natural talent and coordination would take over. He wasn't especially big, or especially fast -- the quirky little mechanics of different sports just came naturally to him.

(Needless to say, this was really annoying when I was 16.)

Copywriting is a little like playing sports; some people are just good at it. They don't agonize over every comma, or struggle to shake the feeling that their message "isn't quite right". They may not even care about copywriting, or think it's valuable. They just make a point, that point makes perfect sense, and they move on to something else.

Growing up, my friend was a better athlete than me no matter what we were doing, whether it was hitting baseballs or jumping on a trampoline. The one place I could match, or sometimes even exceed him, was when we played basketball. It wasn't because I was an especially talented basketball player -- I had just spent an overwhelming number of hours shooting, playing, and thinking about it, to the extent that it managed to neutralize even my friend's prodigious talent.

I had my niche... at least until our friends decided to play soccer, at which point I was totally screwed again.

One of the great things about the individual messages within your drip campaign is that they're great places for you to find your niche as a copywriter and communicator. When your entire argument is summed up in a single blast, there's an enormous amount of pressure on your copy to effectively convey a huge amount of information in a very small space. Sometimes, that's just a necessary challenge; maybe you've been invited to send a one-off message through an enormous channel. In these cases, I recommend getting one of those really good copywriters.

In your drip campaign, though, things can be different. You don't necessarily have to sum up your entire business in a paragraph. You don't have to make people aware of a bunch of background conditions, or quickly educate them on the state of the market while leaving time for the details of your proposition. In a well-designed drip campaign, each email is an opportunity to dig into one of those detailed, individual aspects of your business, where you can share your expertise without having to cram everything into a small space that successfully -- and immediately -- drives a sale.

Yep, you can do Drip Campaigns in Contactually 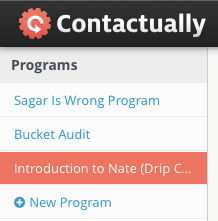 Drip campaigns are just one of the many (and I mean MANY) things you can do with Contactually's Programs feature. Programs allow you to automate all kinds of actions, from sending custom messages, to following people on social networks and moving them in and out of different buckets. Plus, Programs can be as simple or complex as you want -- they can run completely on their own, or require confirmation from you before taking the next step.


Click here to learn a little bit about Programs, or really dig into it with the Contactually Power Users Guide.

Writing for your long-term goals

While the ambition of an individual drip campaign email is less than that of a one time blast, the limitations of the medium aren't wildly different. You still have -- realistically -- a chance to make one solid point. Getting people to open an email is hard, getting them to read it is harder, and getting them to absorb the information in any real way sometimes feels impossible.

The trick with a drip campaign is not losing sight of the battle, and focusing on the larger war. One-off emails that are driven towards an immediate conversion event might be difficult, but at least they're easy to evaluate. If people convert, the email worked. If not, it didn't. Drip campaigns are different; while you'll give users the ability to convert at any time, your true goal is less immediate -- you want each successive email to improve the odds of FUTURE conversion. If someone has read ten one-off emails, you probably haven't increased the effectiveness of the tenth email by sending the other nine. You may have even reduced it. With a drip campaign, though, that improved message effectiveness is exactly what you should be aiming for.

With these goals in mind, here are some tips for writing an effective message inside your drip campaign. And because it's 2014, each one comes with an animated GIF, because... internet.

#1. Above all else, be interesting.

The most important communication resource anyone has is trust, and trust is one of those things that's hard to build, and easy to burn. The pressure to burn trust in the name of boosting immediate conversion is a constant challenge in marketing, but one that you need to learn to resist if you're going to benefit from a drip campaign. If your audience walks away from reading your email with a quick laugh, or a head scratch, that's okay. The important thing is that after reading, they feel a little bit better about getting emails from you -- stuffing a bunch of "BUY NOW, BEFORE IT'S TOO LATE!!!" links in there is the fastest way to remind people that you don't really have anything useful to say.

#2. Make something they can look forward to.

The holy grail of email marketing -- and especially drip campaigning -- is an audience of people who look forward to getting your emails. This is very difficult to measure precisely, so one of the things I used to do was include my close friends, co-workers, and even my parents on campaigns I was responsible for writing. If you get responses like "why are you sending me these?", or "how did your company get my address", it's very likely that you're writing boring, unengaging material. If these random people enjoy reading your work, don't worry about conversions; you're going in the right direction.

[caption id="" align="aligncenter" width="350"] This is probably not a normal "I just got a marketing email" reaction, but you've gotta aim high.[/caption]

3. Take the length and depth of your campaign into consideration.

Don't just write four of your five stages in a fun, conversational tone and then drop the purely commercial conversion bomb on your audience in stage five. You have to build things up. Your first email should establish your voice and personality, and provide an interesting piece of information without any overly pushy overtones. The emails that follow need to push people down the road to making the decision you want, without losing that voice.

4. Use the future to your advantage.

Not to turn this into an 8th grade English class, but it never hurts to use a little foreshadowing. Remember, you're trying to move people in a direction that's new to them, but you know how this movie ends. Use that to your advantage -- highlight the importance of questions you know you'll have good answers for in later campaigns. Define the parameters of important arguments (i.e., my old example of "is it worth buying an expensive TV", which we'll come back to later) in advance, so that when you eventually address them, the answer is you.

You don't get a GIF for this one, because while we're constantly complaining about the fact that our societal attention span has withered to the length of a Facebook post, that's actually not true at all. Why do you think people love serial television? Because IN a world of constant distraction, the writers of things like The Walking Dead, or Scandal, or whatever you're frantically tweeting about tonight, have taken something enormously complex and broken it up into smaller chunks that the audience can enjoy, process, take a break from, and come back to. The value of the series as a whole is greater than the sum of its episodes, and if you can take the long view (and tell an interesting story), the same can be true of almost anything.

Remember, the best kinds of customers -- the ones who will pay the most, get the most value, and promote you to others -- aren't the ones who impulsively click on a shiny object. They're the ones who actually understand what you're offering, and see the value in paying you for it. A long term marketing relationship with someone, if used properly, is a great way to find and nuture these people into those kinds of customers.