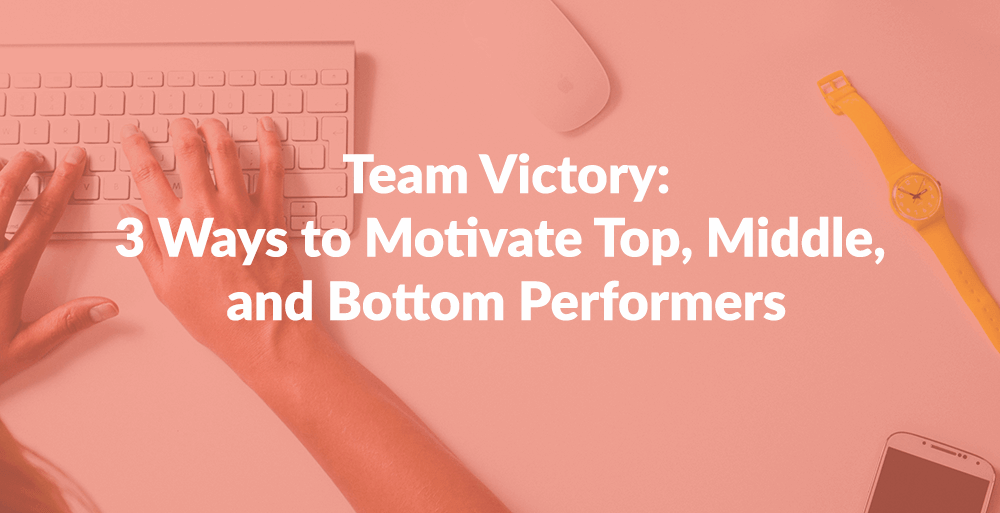 I started listening to a new podcast called Hidden Brain by NPR. It discusses and breakdowns the hidden intricacies of the human mind. The one I listened to, that sparked this blog post, talked about motivations and how our brain feels when we are motivated. The interesting spin was that people generally don't feel more motivated after winning or being rewarded, they feel much more motivated when they are so close to a goal that they can taste the victory. You can listen to it here.

This isn't to be confused with rewarding top performers for exceeding their goal, instead it's entirely related to internal motivations and "almost winning." Winning doesn't necessarily create more motivation, but instead more drive is created when we get close to a win.

So using this psychological theory, how can you motivate your top, middle, and bottom performers with "near victories?"

3 Ways to Motivate Top, Middle, and Bottom Performers on Your Team

We can take a cue from the nonprofit playbook. One example that immediately comes to mind is why and how people donate. We should look at the meter with the amount donated. That's where this "near victory" can be found.

The first option probably feels a little daunting and you would probably wait to donate because in your mind your impact wouldn't be significant, your donation would be no where near the goal. As opposed to the second scenario, there is much more motivation to donate because you are so close to getting to 100% and you can see the impact with your donation. 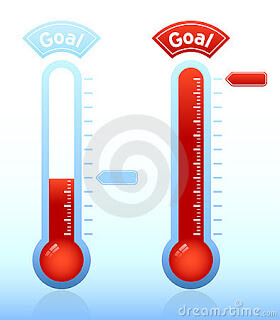 When you visualize your goals, you can clearly map out where your team is in relation to the goal and where you are in the process of near victories. At the start when you are at the bottom of the meter, there is probably a lower amount of motivation as people are working their way to higher gains. However, as you get closer to the top of the meter, that's where you can instill more motivation to your top and middle performers. They are close to the victory.

Hitting this point home, Daniel Pink mentioned in the podcast that "People don't give because they want to be more altruistic, but because they want to be more effective...As people got closer to their stated goal, donations went dramatically up." So, when your team sees they are close to their own goals, it should drive up the motivation for acceleration to the win. Try to set up a meter in relation to your company's goals. Maybe it's gaining more referrals or closing more business, visualize your performers overall contributions to those goals. You'll probably find as your team gets closer to their goal they will hit it faster.

Where you are in terms of achieving your goal will outline how motivated you will be to hit the goal? So what can you do to outline the goals?

When you show how much an individual contributor has produced on the way to hitting their goals, you have a direct way to motivate and increase their productivity with that measurement.

Let's say you show that your team needs to make 50 follow-ups in the week. Your conversion rate shows that if they make this number they'll close at least 10 deals, which leads to a certain amount of revenue. Measure the follow-ups, map out where they are currently at, and then show how much ROI they've amounted with those actions. If you outline this process, and push down on the latter half of the goal, your team is much more likely to feel more motivated towards the end to do those follow-ups.

Warning, this could backfire and create a cut-throat atmosphere without proper coaching, but instilling some competition into some of your processes can motivate and improve productivity significantly. So, how can you ignite some competition?

Through the "near-victories" idea, identifying where people stand can propel the motivation forward. The top-performer may only be at the top by a small margin, which could empower the 2nd place performer to soar to the top. Some examples for ranking could be the number of follow-ups sent, amount of referrals driven, deals closed, and amount of leads turned from cold to hot. Whether it's in a dashboard or an automated email that goes out every week, this will allow for some friendly competition among your reps.

Back to the point on avoiding the "cut-throat" nature of competitiveness is touching on the idea of coaching your top, middle, and bottom performers. As you are tracking these successes, it's time to meet with the non-first place performers to let the know that they were close just not their yet. In the Hidden Brain podcast they noted "Coming close to winning something can really effect your drive and motivation." Let your team know that you saw their performance, they almost got the win, and map out the specific tactics they can do to have better results or what they can do to win. Your team will see the success of the top-performer and understand what they need to do to become that top-performer, which can drive more effectiveness and motivation through this "near victory" principle.

This last point on competition is another aspect from the podcast: When you get closer to a reward your motivation intensifies as you approach the reward, if you don't get the reward, you have this intensified motivation state that is not satisfied and it will spill over, and make you seek other unrelated rewards.

So, if your middle performers didn't win the initial competition and they may have nearly missed it they will try to seek out other rewards. This will allow you to help create better habits across your team.


Figuring out motivations is not an easy task, especially when it comes to figuring out how to drive more productivity and success. Your teams, brokerages, and firms are all made up of different individuals; however, using this "near victories" principle can help boost the motivation of your top, middle, and bottom performers. You'll be raking in the success in no time.
Next Post
3 Ways to Grow Your Legal Practice