10 Surprises from a Month Working At Contactually

Like many people, when I hear the words "software company," I first think of Initech from the movie Office Space. So naturally, when I decided to spend the month of January working at Contactually, I harbored fears that my experience there would be comparably miserable. Like Peter, Office Space's main character, I actually did have multiple bosses and overhear sales calls all day. Once, I was even asked if I got the memo. Thankfully, that's where the similarities ended.

So if you've ever wondered what Contactually really looks like- what goes down on the other end of your support ticket, what the sales team says after hanging up the phone, or what they're wearing (if anything)- read on to see ten of the biggest surprises about working at Contactually. 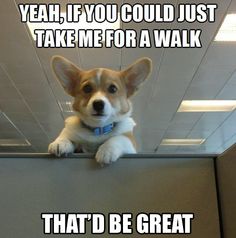 I wasn't sure what to expect when I showed up for my first day of work at Contactually, but I was surprised anyway when I was barked at from the moment I came through the door... by a pack of dogs. As it turns out, bring your dog to work day - the best senior prank my high school class managed to organize - is every day at Contactually. 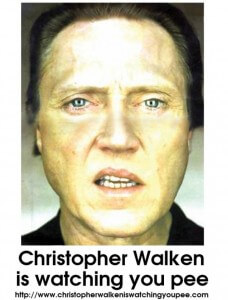 This surprise was, admittedly, an unpleasant aspect of working at Contactually for the first few days. Eventually, though, I gained the discipline to avoid his picture's intense gaze (printed and posted at eye-level in the bathroom). I was almost fond of it by the end of my time there -- ok, not really, but what it represented was golden in a workplace. Company culture thrives at Contactually, and embracing silly print-outs and outrageous YouTube videos is just one way they keep it alive. Another is ordering an oil and canvas portrait of the founding fathers with the Contactually founders' faces photoshopped in. Yes, that really happened.

3. They wear really nice shoes, or nothing at all. 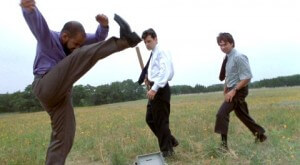 A couple weeks before I started working at Contactually, Alexandra told me that I should expect to wear "business casual" attire on the job. I was a little worried about this, because my business attire consists of little more than a pair of khaki's and a suit I bought for a school dance in 9th grade.

In retrospect, I need not have worried. The marketing team actually does dress very well, supporting my long-held belief that your major in college predicts (or at least corresponds with) the sophistication of your daily wardrobe.* But I have to call out the engineering team on this one, because they, too, supported my theory by wearing jeans and t-shirts pretty much daily. One constant in the equation (and sign that we were still in DC) was that nearly everyone wore some very good looking shoes every day. Except Nick, who occasionally walked around barefoot, and once bragged on Hipchat about working "in his birthday suite" while working at home for his birthday... Holiday Inn, probably.

*As a freshman at MIT, I know my fate is sealed. My sister hasn't given up hope for me yet, though. Her mantra for me is "dress like an English major, think like an engineer." 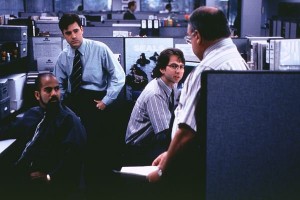 "I'm a sorry sucker, and this happens all the time..." Ok, I give up, this has nothing to do with the Neon Trees. But when your people have the option to go out to lunch, and they immediately take it back to eat it in the conference room with those who brought one, you know there's some serious company chemistry. It's not like we never see each other; the least occupied office here is still shared by three people. It's just that Contactually has what everybody wants: coworkers who genuinely enjoy each other's company (pun intended). 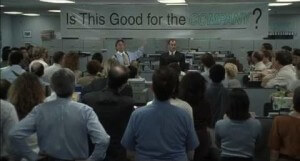 One of the company values is "let the data decide," and boy, do they take that one seriously. At Contactually, every business metric you could think of is tracked and analyzed as they strive to improve their product and grow their company. As a result, the strategy adjustments they make are efficient and well informed. The data overload can definitely make meetings a little esoteric, with numbers and acronyms flying around like it's the New York Stock Exchange, but it certainly beats "is this good for the company?" as a decision motivating slogan. 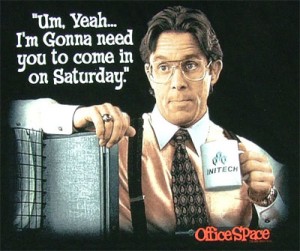 I felt pretty tired after nine hours a day at Contactually, but those hours, as it turned out, were a luxury none of the full-time employees shared with me. Aside from special circumstances like going to the airport, nobody at Contactually left before me on a work day for the entire month I was there. I sometimes arrived earlier, but half of those times, they had been working from home. When I heard that people at startups worked around the clock, I assumed that was only true for the very early days of a company. It came as a shock to me that with 17 team members and thousands of customers, most people in the office still worked over 12 hours a day, frequently skipping a lunch break to keep up with their long lists of bug fixes and phone calls. Their dedication was inspiring.

7. They tell you not to buy Contactually.

I worked among the sales team while at Contactually, so I overheard some interesting phone calls with clients. The outrageous ones were usually fake- Nick was especially good at making us laugh with those- but occasionally, on actual sales calls, he and Brent would advise leads not to buy Contactually. "After talking with you about what you want from Contactually," they would say, "it seems to me that our platform may not be the best fit for your company." They'd even recommend another service to get the job done better. I briefly wondered whether there was a mutiny going on. (Was someone being paid off by a competitor to turn our leads away?) It wasn't reverse psychology, which would be a questionable sales tactic anyway. In fact, as they explained to me later, customer service is expensive for Contactually, so it isn't worth it for anyone to force this product into the workflow of those who will have trouble getting anything out of it. That was when I really started believing the Contactually rhetoric. When they say Contactually will help your business, they mean it, because if they didn't think it would help, they wouldn't say so.

The bar is better stocked than my fraternity's. Yes, I know it's an MIT frat, but still. When my last day was coming up, I unexpectedly got a Google Calendar invitation to a going away party they decided to throw in my honor (or perhaps to celebrate some extra desk space?). I had not asked for one or approved of the date, but quickly learned that the issue was non-negotiable. There would be a party.

9. They are technology wizards. 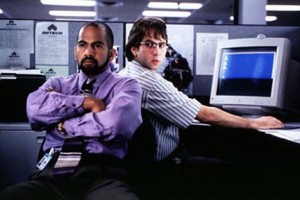 My friends at Contactually are some of the most technologically literate people I know. Keep in mind that I go to MIT, so I don't say that lightly. They comfortably navigate a wider range of software than I thought possible for a company this size: Gantt, Evernote, Zapier, Hipchat, Hubspot, Salesforce, Wordpress, Google Drive, Pocket, Skype, Basecamp, Boomerang, Contactually (obviously), and others. It wasn't just the engineers, either- the sales team members were excel masters, and marketing worked wonders with Hubspot and Wordpress, no small feat for the computer science layman.

Brent liked to remind us that he sent over a thousand followups a day with his Programs wizardry, maintaining an A+ in his dashboard and "easily" topping the company leaderboard each week. He and Nick reach out to every single new user, offering to help them get set up with Contactually one on one, or offer insight on its advanced features through our daily online office hours. If you are a Contactually user who has spoken with Nick, Brent, or a member of the support team about your account, you may be surprised to learn that the customer to staff ratio at Contactually is over 1,000 to 1. In spite of this and a rapidly growing user base, their paid client retention rate is over 95% and their customer satisfaction ratings continue to climb. Their incredibly high level of attentiveness to all of their customers and the rest of their 58,000 person network is made possible by the same contact management platform they produce. With this in mind, I am inclined to say that the best of all the Contactually success stories is Contactually.

For this and other (minor) reasons, I elected not to "pull a Milton" at the end of the month. 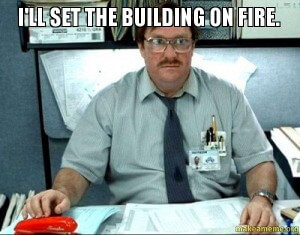 Next Post
Highrise's Uncertain Future and How to Find CRM Software